Jakarta, 19 August 2015: Gulf Craft is set to showcase one of the most acclaimed superyachts from its ever-expanding portfolio, the Majesty 105, at the upcoming Indonesia Yacht Show, an event which caters to Southeast Asia’s largest luxury market by population.

Following its success at the Singapore Yacht Show earlier this year, Gulf Craft sees the Indonesia Yacht Show as an excellent platform to introduce its world-class craftsmanship to the growing UHNWI population in the nation. 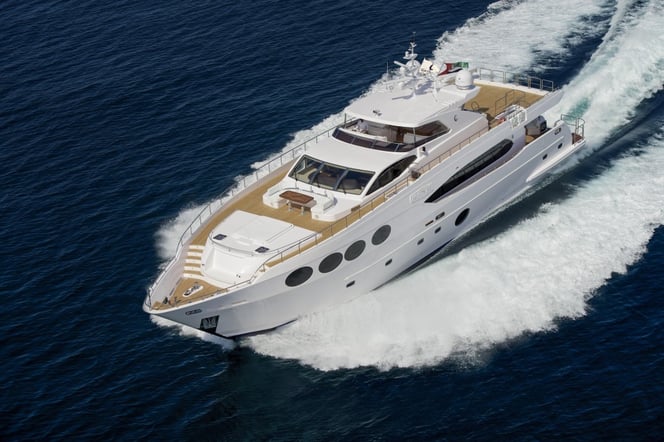 The Majesty 105 will be on display this year at the Indonesia Yachts Show.

The company’s exclusive yachts and boats have been especially crafted to provide its customers with an unrivaled lifestyle experience at sea, complementing the magnificent waterfront scenery of the country. Serving the Southeast Asian market for over 20 years, Gulf Craft continues to demonstrate its firm commitment to the region and its nascent yachting scene.

The latest figures from Wealth X indicate that the UHNWI population of Asia has increased by 4.8 percent from 2013 to 2014, with a regional wealth increase of almost six percent. Indonesia currently stands among the top ten countries in the region, with a total UHNWI wealth of USD 130 billion, demonstrating the nation’s healthy appetite for luxury.

Last year's indoor stand at the Indonesia Yachts Show. This year, Gulf Craft will be at the marina area with the Majesty 105 on display.

“Superyachts are among of the top investments made by UHNWIs worldwide, offering customers from Miami to Jakarta an unmatched experience of luxury,” said Erwin Bamps, CEO of Gulf Craft.

“At Gulf Craft, we are constantly striving to meet the evolving demands of customers around the world, providing them with dependable, exquisitely-designed yachts and boats. Our engineered innovations are built for customers of varying lifestyles, from corporate buyers who wish to entertain business guests to individual customers who enjoy family trips around the picturesque islands of the region.”

The 3rd Edition of Indonesia Yacht Show 2015 will be hosted in the Batavia Sunda Kelapa Marina, Jakarta from 21-23 August. Gulf Craft will be welcoming its guests at the on-water stand D-26.

Gulf Craft invites you to the Indonesia Yacht Show 2014

Gulf Craft, one of the world’s top 10 superyacht builders, continues its drive to promote its Majesty Yachts brand in the Asian ...
Start Reading
Gulf Craft May 5, 2015 8:21:50 PM 6 min read

5 May 2015: The recently launched Majesty 122, built by one of the world’s leading superyacht shipyards, Gulf Craft, showed an ...
Start Reading