The Gulf Craft Nomad Yachts range goes from strength to strength as the company pushes the innovation button with the launch of an extended range of Nomad Yachts at the Dubai International Boat Show. The new range is added to the already successful Nomad 55, Nomad 65 and Nomad 75 models which have made waves in the industry over the last four years.

The boating market has been changing as an increasing number of yacht owners want to venture further afield with a desire to explore new cruising grounds. Recent years have seen the rise of the older adventurer, while the younger generation become travellers rather than tourists. This trend has given rise to yachts that can combine practicality as well as style for the growing number of customers seeking ‘Adventure on-board’. Gulf Craft realised that the market was changing five years ago which prompted the development of the aptly named Nomad Yachts brand. Nomad being defined as ‘A person with no settled home who moves from place to place’, perfectly describes the genre of this brand aimed at those with exploration and adventure at heart. 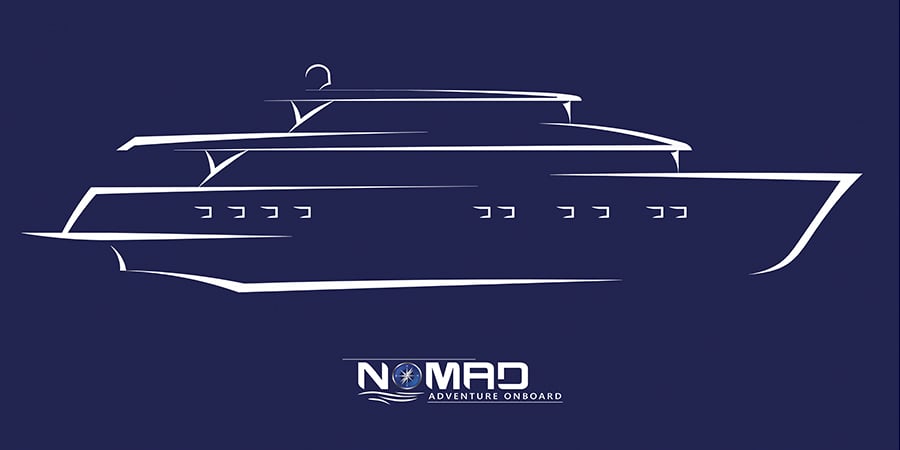 Research by Gulf Craft revealed the need to produce a brand that represented values of reliability, seaworthiness, stability and ruggedness, indeed a four- wheel drive car of the sea. A key element of the design brief for the new Nomad Yachts was to produce vessels that are extremely seaworthy - the choice of the hull design was a critical factor. The company commissioned the renowned British designer Andrew Wolstenholme to draw up the hull lines of earlier 65 and 55 models and the new flagship Nomad 95. The same design formulae was used on all models with Wolstenholme drawing the hull lines and Gulf Craft Chairman Mohammed Alshaali and his in-house design team at Gulf Craft creating the styling of the superstructure, the interior layout and the engineering details. All this has been made possible by Gulf Craft’s massive investment in Computer Aided Design (CAD) and Computer Aided Manufacturing (CAM). This technology dramatically reduces the development time for a new design and cuts build time to enhance overhaul business efficiency, a key reason why Gulf Craft offers exceptional value for money in all of its product ranges. The Nomad Yachts range also incorporate the latest construction materials such as Carbon Fibre and Kevlar in the deck and fly-bridge increasing stiffness, reducing weight and enhancing the stability of the yacht.

The fleet of Nomad Yachts all use a hybrid hull design that gives an outstanding ride in rough conditions with the potential for long-range cruising at a comfortable 15-20 knots with 30 knots maximum speed if required.  While all the models are excellent sea boats, the interior design and finishing touches give a five-star home away from home feel to the yacht, a mini superyacht in fact.

The performance and handling of the models under the Nomad Yachts range have been proven in the Gulf, Turkey, Australia, Malaysia and Indonesia with long distance voyages. The first sea trials in late January of 2015 from the shipyard to Kuwait, a distance of 500 nautical miles was undertaken by the company’s chairman in rough sea conditions on the Nomad 65 showing the yachts sea keeping ability to advantage as it left the accompanying planning hull designs in its wake, slicing through seas as high as 12 feet and winds up to 35 knots.

For experienced boaters in the Gulf and those in mature boating markets like Europe and Australia, where owners value practical features and may be skippering the yacht themselves, the existing Nomad Yachts range along with the new line of crafts to be revealed at the Dubai Boat Show is sure to tick the right boxes.

Following the successful release of our Gulf Craft app in the iTunes store for Apple devices, we have also recently launched ...
Start Reading