The inaugural two-day China Marina Conference was held at Nansha Marina, Guangzhou, October 10-11, 2012, attracting more than 100 delegates locally and overseas. It was the largest turnout of boating industry professionals during a conference in Southern China. 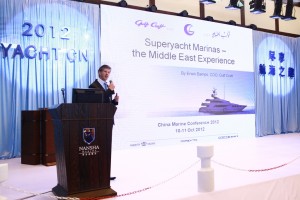 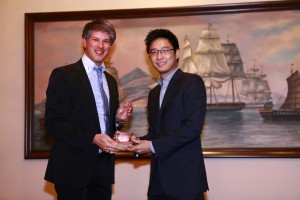 The China Marina Conference was held just ahead of Nansha Boat Show, Oct 10-11, 2012. Erwin Bamps, COO Gulf Craft, (7th from the right) was one of the speakers

Mr.  Eric Fok, Commodore of Nansha Marina, said: "I am extremely pleased with the support from our 21 expert speakers  including 17 from overseas who have given us the benefit of their knowledge.  The marina industry is growing rapidly in China and there is a need for not only marina equipment but for expertise and training. We see the conference as a platform and gateway to inform the industry in China about the latest developments  in marinas and marina management and also to encourage networking between China  and countries with established marina industry.”

The marina industry in China is still in its infancy but is showing promise for growth. According to Yang Xinfa, Chairman of the China Boat Industry and Trade Association, there are over 2,000 leisure boats currently registered within the country. In his presentation at the conference Yang stated that he believes there’s a potential for much faster growth as there are many marina projects in the planning stage.

Erwin Bamps, Chief Operating Officer Gulf Craft, was also present as a key speaker, highlighting the Middle East experience in superyacht marinas development and owner's experiences. He confirmed a positive outlook for the marine industry : “With the new wealth in China and Southeast Asia, we can see an increasing ability and appetite for luxury spending. At the same time the government and real estate developers are spending efforts in building up infrastructure like residential developments and integrated marinas to bring people to the waterfront. Combining both, we see a clear growth potential for the yachting and boating industry."