Majesty 155 'Ship of the Desert' by Invictus Magazine

Invictus magazine features a staggering 12-page write-up on Gulf Craft's largest superyacht to date, the Majesty 155, in their latest Summer 2015 issue (no. 12) entitled "Ship of the Desert".

The Middle East is a conspicuous consumer in the superyacht industry, but few west of the Atlantic would recognize it as a superyacht builder. The UAE’s leading emirates, Dubai and Abu Dhabi, are renown throughout the world for decadent luxury, spectacular architecture, incredible facilities and an ‘anything is possible’ approach… so how does the latest flagship of Majesty Yachts in neighboring emirate Umm Al Quwain measure up to this yardstick?

Tradition, heritage and culture are words invariably linked to Middle East boat building. For a thousand years, the fishermen and pearl divers from the southwestern shores of the Arabian Gulf set out in beautiful dhows built on the banks of local creeks. With lateen sails blossoming on the horizon and craft reaching remarkable speeds, the modern dhow racing fleet is still a spectacle to behold.

As dramatic changes took place on land with the discovery of oil, the founding of the United Arab
Emirates and the blooming of contemporary coastal metropolises, so did the nature of the craft plying the azure waters of the coast. The construction of seafaring vessels continues today in the UAE, but on a much larger and noble scale. 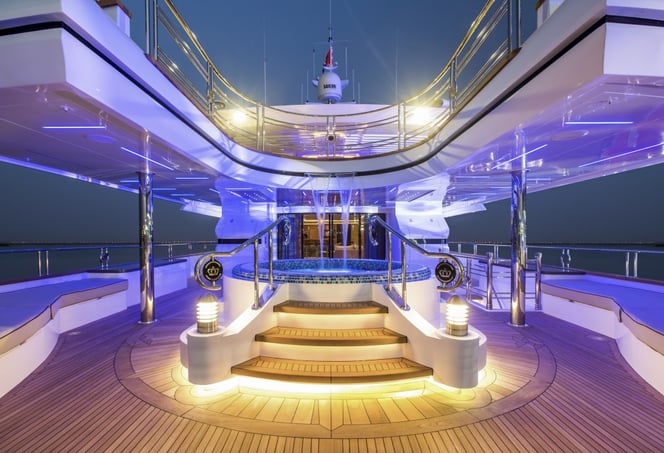 The Majesty Yachts 155 is the biggest superyacht ever to have been entirely built in the Middle East. At 47m, she is a testament to the diverse mix of Arab cultures that built her; joining her Emirati custodians, creative individuals from Syria, Palestine, Iraq and Iran have all played their respective parts in giving hull number one, a subtle Arabic feel. The Majesty Yachts shipyard, situated an hour north of Dubai on Umm al-Quwain’s deep blue creek, is unique in its element.

Where many of the world’s shipyards are located in grey dystopian industrial landscapes, Majesty Yachts is surrounded by lush mangrove islands where nesting birds thrive and Arabian gazelle
roam free. The waters off its huge waterfront site are filled with barracuda, cobia and king fish… this isn’t a shipyard, it’s a paradise retreat!

In Review: Gulf Craft at the Qatar International Boat Show 2015

15th November 2015- Gulf Craft's participation at the 3rd edition of the Qatar International Boat Show ends on a high note with ...
Start Reading