Previous Post
Next Post
Hailed as “the most significant superyacht to arrive in Australia for many years”, Ghost II is the custom designed and built, 37.3-metre (122-foot) Majesty Yachts that boasts a string of ‘firsts’ and will exponentially boost the credentials of the Australian charter market.

“She has been booked consistently since arriving on our shores just a few weeks ago,” he said, adding that Ghost II is over and above anything people have experienced before.

“Ghost II is the most technically advanced motor yacht to enter charter in Australia,” Morris asserted. “Her list of ‘firsts’ include having been built to RINA Commercial Class, Cayman Islands Large Yacht Code (LY3) and AMSA Domestic Commercial Vessel (DCV) Survey – meaning it sets a whole new standard in safety, quality and luxury.”

Australian Superyachts was involved during the entire process, from the sale of the vessel to an astute Australian owner, to overseeing the build for two years, which involved being onsite for a total of 180 days at the shipyard. 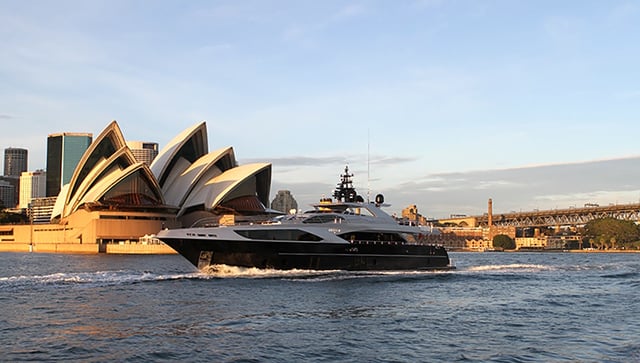 Only in the country for a matter of weeks, Ghost II is already in demand for corporate and longer stay charter

“We worked with our in-house naval architects and project managers to manage the compliance to Australian standards. It was a huge job. Testament to the fastidious quality is that the yacht passed with flying colours, achieving survey within seven days after its arrival in Australia. Inspectors commented on the remarkable detail and quality of the build.

“Ghost II offers the safety and stability of a passenger ship with the luxury features you would expect from one of the world’s most awarded superyacht builders.”

A Majesty 122 raised pilot house superyacht, Ghost II boasts massive spaces for entertaining and relaxing. The huge flybridge is ideal for special events and is fitted out with AV, a six-person Jacuzzi, sunpads, bar, five different spaces for dining and socialising and a balcony that extends off the main saloon.

“On special occasions, such as New Year’s Eve on Sydney Harbour, everybody will have a great view – the deck space is enormous,” said Morris. “There are multiple TVs, Bang & Olufson AV, an ultra-modern gourmet galley and onboard Chef.”

It’s Aussie-centric characteristics include large barbeque on the flybridge deck, oversize fridges, an arsenal of watersports equipment and plenty of cosy spaces for relaxing and generous spaces for spreading out and socialising.

With her impressive black gelcoat hull, fully UV protected, and muscular profile, Ghost II will be a sight to behold on Sydney Harbour or The Whitsundays this season, catering to both corporate entertainment clientele and longer stay charters for groups of up to 12. 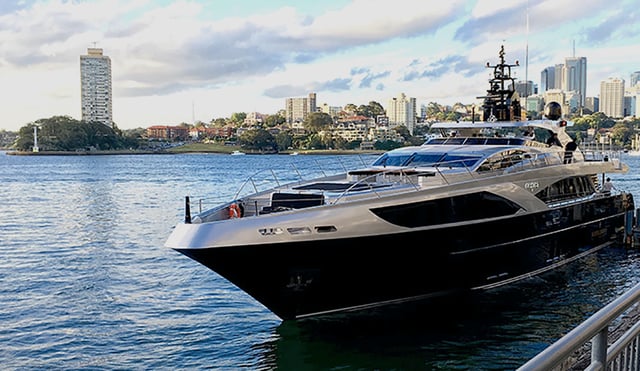 She is registered for a maximum of 120 passengers for events in sheltered waters, such as Sydney Harbour, Hamilton Island, Moreton Bay, Rottnest Island, or 12 guests accommodated onboard. Her  crew are seasoned professionals with qualifications and reputations befitting their new vessel.

Inside Ghost II, the décor is lavish, yet restrained. A monochrome palette, gloss joinery, geometric motifs, mirrors and subtle lighting draw on Art Deco influences in a style chosen by the owner in collaboration with Gulf Craft designers.

“The owner was very involved in the build and every detail of the interiors,” explained Morris. “He is typical of the savvy Australian superyacht owner. They’re experienced owners and don’t want a standard boat. They want the freedom to create their own and understand the benefits of running it commercially, to offset running costs and save on import duties.

“In vessels over 100-feet, owners want much more from their yacht. They are finding it with Gulf Craft, which offers tremendous value for money and offers personalisation in its range of semi-custom motor yachts.” The local charter market is growing, slowly but surely, Morris explained.

“This summer in the Mediterranean was a record year for charter. We have had a lot of overseas interest in Ghost II and chartering in Australia. Australian Superyachts exhibited at charter shows in Genoa and Antigua, and we will attend Barcelona in 2017. Our relationships with charter brokers and our experience running superyachts in the Mediterranean and Caribbean ensure brokers are confident to send us their clients.

“The Australian fleet is increasing and the message has reached the market that our cruising grounds are safe, uncrowded and pristine. There’s something on all year-round in terms of events and a wonderful climate, plus Australia is the launching pad to Fiji and the South Pacific.

“Superyacht Australia and our other Australian brokers are doing a great job of promoting Australia and the South Pacific at international yacht shows. The luxury end is growing and if we play it right and look after them, it will lead to referrals and repeat clients.

“New yachts like Ghost II are filling the void of foreign flagged vessels not having the freedom to charter downunder at the moment.”

Building on a reputation established through successfully operating the popular Ghost I, a sleek Warren 87, Ghost Elite Charters will operate Ghost II. In the short term, Ghost II will host events and longer charters on Sydney Harbour and The Whitsundays and in coming years, it’s likely its range will extend to Tahiti and Fiji.

A Majesty 122 fully delivered in Australian Commercial Survey is priced from AU$12.5 million with an approximate 18 month build time.

This superlative superyacht will soon be joined by stable mates, already under construction for Australian owners and built to same exacting standards for charter. Morris can only hint at their plethora of features, but can say that they are scheduled for delivery in 2017 and 2018.

Guests at the Sydney International Boat Show queue at the Gulf Craft & Australian Superyachts stand waiting to get a chance ...
Start Reading