5 May 2015: The recently launched Majesty 122, built by one of the world’s leading superyacht shipyards, Gulf Craft, showed an early start to success after winning the prestigious Best Asian Built Yacht award, demonstrating the shipbuilder’s commitment to delivering world-class craft.

The Asia Boating Awards recognize global and regional yachting brands that have consistently demonstrated outstanding achievement in Asia throughout the year. After meticulous evaluation by a panel of experts in the leisure boating industry, the Best Asian Built Yacht Award goes to the yacht that demonstrates outstanding build quality and that was manufactured in a shipyard located in the Asia. 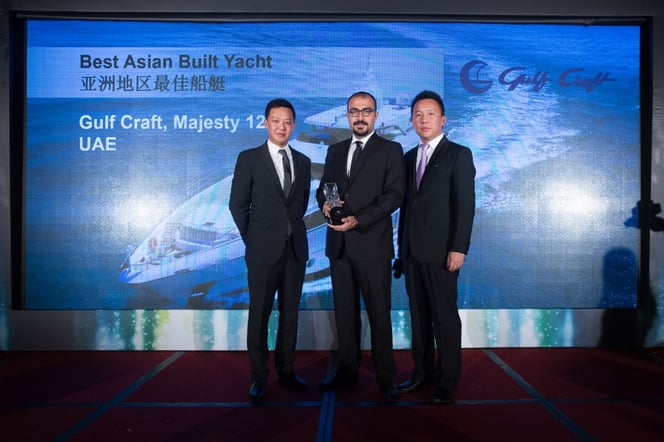 Mahmoud Itani, Marketing & Communications Manager, receives the award for the Majesty 122 at the Asia Boating Awards in Hong Kong

Gulf Craft’s achievement follows recent success at the Singapore Yacht Show, where the shipbuilder received an overwhelmingly positive response for the brilliant display of its craft, including the Majesty 105, the largest superyacht Gulf Craft has ever brought to South East Asia, and the oceangoing Nomad 65, engineered for those with an appetite for long-range sea travel, as well as the Majesty 48, a full option fly-bridge yacht.

Since its global launch in March, the Majesty 122 has proven to be a welcomed addition to the Majesty superyacht collection, Gulf Craft’s line of luxury fly-bridge motor yachts that combine style and elegance with innovation to create the epitome of truly royal cruising. 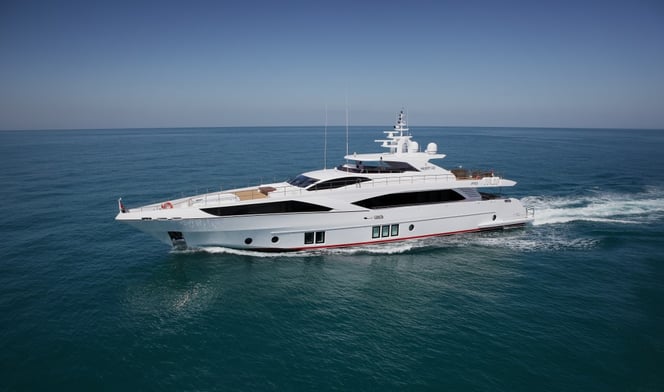 The Majesty 122 has unrivaled lounging areas for entertaining, including two decks with lavish interiors, an extended balcony, and a spacious fly-bridge. The superyacht also offers a fully equipped galley, luxurious accommodation for ten guests, with five spacious en-suite staterooms, and a garage able to hold a tender and two three-seater watercraft, further raising the bar for recreation and entertainment.

Gulf Craft has an exceptional track-record with the Asia Boating Awards, receiving an accolade in 2013 for the largest superyacht in its collection, the Majesty 135, as well as the Best Asian Yacht Builder Award (15m to 24m) in 2014. The yacht and boat builder will continue to present its innovations to the region, with plans to showcase its craft at the Indonesia Yacht Show in August. 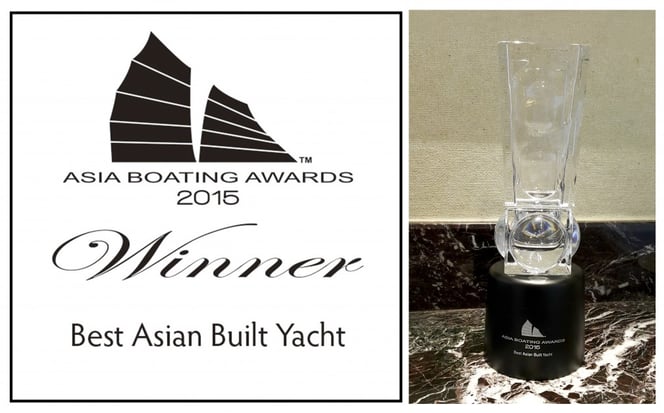 “It is truly an honor to receive such an esteemed recognition from the Asia Boating Awards. We are continuously driven by our dedication to innovation, and our vision of bringing to life the diverse aspirations of boating enthusiasts around the world through our wide range of craft,” said Erwin Bamps, CEO of Gulf Craft. “The Majesty 122 was engineered with our Asian customers in mind, stretching the outdoor living experience into the interior, and allowing seafarers to enjoy breathtaking surrounding views while entertaining their guests.”

Initiated by Asia-Pacific Boating and China Boating magazines in 2005, the prestigious annual Asia Boating Awards recognize the best of the maritime industry in Asia and internationally. Presented during a lavish ceremony in Hong Kong, the awards serve as benchmarks for the industry in the Asia-Pacific region.

In Review: Gulf Craft at the Cannes Yachting Festival 2015

7 May 2015: Gulf Craft celebrated its 33rd Annual Sports Fest at its Majesty Yachts facility in Umm Al Quwain with more than ...
Start Reading