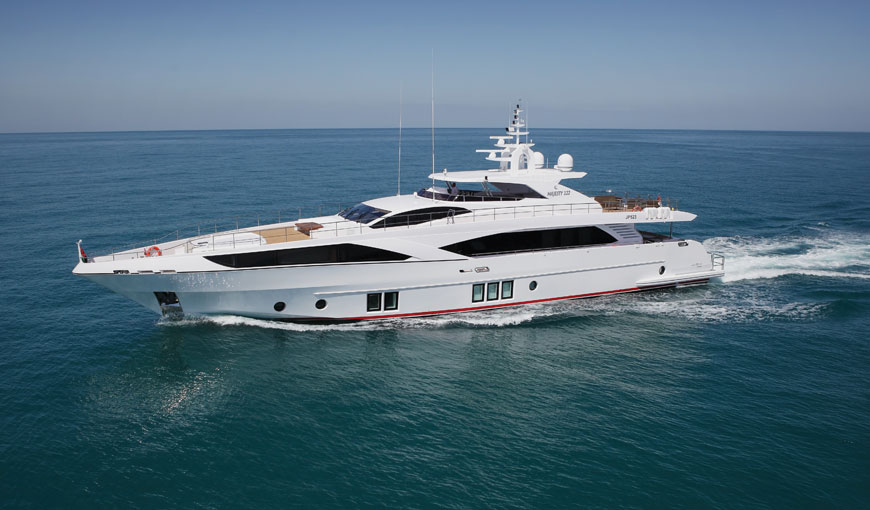 A brand that has gone from strength to strength in recent years, United Arab Emirates-based Gulf Craft has become synonymous with sumptuous design that also offers outstanding seafaring capability. At 37.3 metres, the Majesty 122 is another major evolution for this distinctly forward-thinking builder.

Gulf Craft has introduced yet another addition to its Majesty Yachts brand portfolio, the Majesty 122 superyacht. The yacht had its exclusive preview at the Kuwait Yacht Show in the first week of February, where, with its flowing lines and sleek styling, it was the undoubted star of the show and the largest superyacht at the event. The Majesty 122 was the flagship of Gulf Craft’s presence, with nine other Gulf Craft yachts ranging from 27 to 122 feet, making the company the largest exhibitor at the Kuwait Yacht Show.

The Majesty 122 had its global launch at the Dubai International Boat Show accompanied by its bigger sister the Majesty 135 and the 12 Gulf Craft boats that presently make up the company’s growing range.

The Majesty 122 is a superyacht created with a global lifestyle in mind, a blend of style with functionality. Ample deck as well as interior space is a distinctive feature throughout the boat. From the main saloon, five staterooms, raised wheelhouse to the commanding sundeck, guests can enjoy the entire upper deck space with ease, as well as being able to descend to the forward sundeck area near the bow. With more emphasis and focus on water sports, the Majesty 122 has the largest tender garage in the range. With space for up to two personal watercraft and a rigid hull inflatable tender, all three watercraft are launched with the aid of a remote- controlled crane located on the side of the garage. With ample space for diving and fishing equipment plus all of the support items a modern superyacht needs, everything is secured once the garage door is closed to the elements.

The yacht’s flybridge offers access to the front bow area.

Commenting on the launch of the Majesty 122 the chairman and founder of Gulf Craft, Mohammed Hussein Al Shaali said, “Kuwait has a strong cultural link with the seafaring lifestyle that stems back to the days of being a key trading and pearl fishing port for dhows. Seafarers ventured throughout the Gulf and down to the Arabian Sea and Indian Ocean as far as Zanzibar. This heritage has been handed down to modern-day Kuwaitis who still have a passion for the sea.”

To prove the seakeeping and reliability of the Majesty 122, Al Shaali insisted on a shakedown trip to the Kuwait Yacht Show from the Majesty Yachts Shipyard in Umm Al Quwain near Dubai in the United Arab Emirates. The trip took two days to cover the 500 nautical miles, Mohammed Al Shaali and his Gulf Craft partner, Dr. Mohammed Hamdan Al-Shamsi, made the point of being on the delivery trip to personally check out the performance of the Majesty 122 and four other smaller Gulf Craft boats that made up the flotilla. Recounting their experience Mohammed Al Shaali said, “We encountered rougher conditions than we anticipated with winds gusting to 35 knots and wave heights of up to 12 feet. Despite this the Majesty 122 handled the conditions very well and we were able to carry out the trip without delay.”

Kuwait has an active leisure boating market with an estimated total of 15,000 leisure boats over five metres in length, making it the largest boating market in the Gulf. Gulf Craft has been selling its boats and larger yachts in Kuwait for over 25 years and reliable estimates suggest that the company has a 40 percent market share. As a market Kuwait is forecasted to see more larger yacht sales once the new Sabah Al Ahmad Sea City Marina complex opens later in 2015. Gulf Craft is well positioned to take advantage of the opportunities this presents.

The company has come a long way since it delivered its first boat back in 1982. Initial offerings from the company were practical small boats used mainly for fishing, one of the most popular commercial and leisure activities for locals who use the skills handed down by their forefathers. From its small beginnings, Gulf Craft developed its boat manufacturing skills and soon moved on to larger boats with its first flybridge offering, the Adora 53, proving an instant success in 1992.

With the business based in the Gulf, one of the world’s fastest growing areas of rising wealth, demand for luxury products such as leisure boats was strong and Gulf Craft was in a favorable position to grow its business. It quickly became the leading boat manufacturer in the Middle East. The strong home market made an excellent foundation on which to build the business and exports started in 1993 with sales to South East Asia, an area where the company has a growing market presence. At the end of the 1990s, the chairman’s vision to exhibit a superyacht at the Dubai International Boat Show was on the way to being fulfilled. Into the 21st century a new shipyard was established in Umm Al Quwain, which allowed the production of yachts of 24 metres and above. Gulf Craft was now in the superyacht business.

The company launched the Majesty Yachts brand in 2004 and the range now extends from 48 feet to the latest 155 model currently in production. The Majesty 122 is the newest offering in the range with a stunningly modern interior design furnished using the latest stylish materials. It is the product of the highly equipped shipyard, which has a nearly 2,000-strong work force. 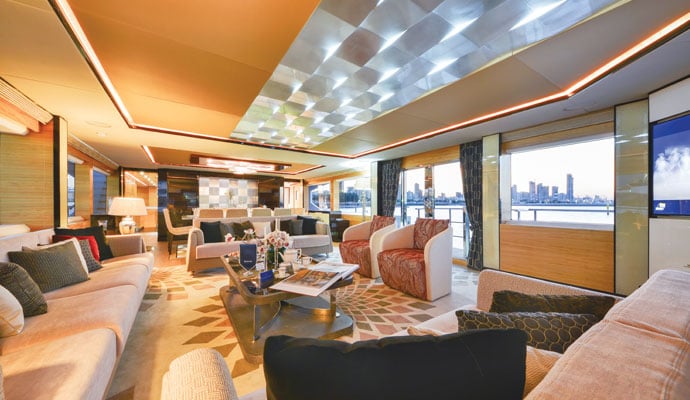 The saloon enjoys deep windows, contributing to a contemporary, spacious feel. The forward end of the saloon offers dining for an impressive 12 people.

Gulf Craft is largely self-sufficient in producing most of the joinery, stainless steel, windows and other high- quality components needed for modern superyacht production. This extends to cutting its own marble, which is extensively used in the Majesty Yachts range for flooring, galley work surfaces and vanity tops. The company has invested in the latest water jet cutting machinery and design technology to ensure a high- quality finish for stainless steel and marble components.

The new Majesty 122 has a layout of two accommodation decks and a sundeck, which have been tastefully finished to represent the best of superyacht style and design. There is accommodation for 10 guests in five staterooms, four crew in two cabins and an additional captain’s cabin, all with en suite head compartments. The sumptuously designed interior is matched by its impressive exterior layout, including a large sundeck equipped for entertaining and a well-placed forward sundeck. On the starboard side of the main saloon is a folding balcony ideal for taking the evening sunshine over the water.

Entering the yacht’s saloon from the cockpit using the wide sliding doors, there is an immediate impression of space with a large area lavishly fitted out in a contemporary style. The saloon benefits enormously from the deep windows, which give a panoramic view, standing or seated. Nearly as deep as the windows, is a massive 65-inch High Definition LED Smart TV, while for those wanting to take some air over the ocean, there is the folding balcony. At the forward end of the saloon is a dining area for up to 12 people, which is easily accessed from the main galley together with a day head. 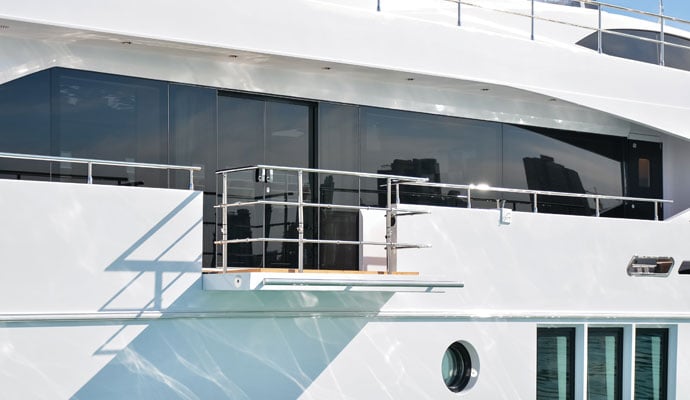 The folding balcony on the starboard side of the saloon is among the best vantage points on the Majesty 122.

Throughout the saloon and the rest of the guest accommodation, the aura of luxury is maintained by the highest quality of soft furnishings, equipment and fittings including Yarwood and Stolz leathers, all accented by the paneling in Avidore and Ebony veneers with white oak parquet flooring. There is a lot of marble used throughout the superyacht including patterns such as Arabescato, Limestone, Afiyun Sugar, Orange Onyx and Classic.

Moving forward to the owner’s stateroom, there is a desk and office space allowing business to be conducted while afloat via satellite links. The owner’s stateroom is sumptuous, occupying the full beam of the yacht. The deep windows gives a bright feel to the stateroom which is as luxuriously equipped as the saloon. An intriguing touch is the large 55-inch Ultra High Definition TV, which is inset into the mirror which remains invisible until the TV is switched on. The marble in the owner’s stateroom extends to the floor and vanity tops, which complements the quality of leather used on the countertops and two desirable walk-in wardrobes.

The staterooms, two with double berths and two with twin single berths are equipped with 32-inch mirror TVs, full-length hanging spaces and, once again, deep windows just above the waterline. 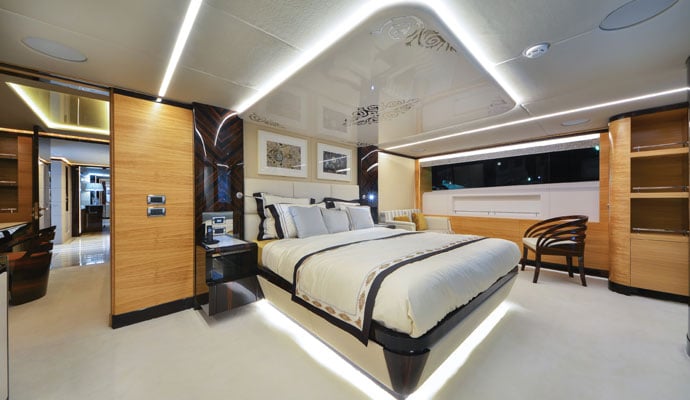 The large owner’s stateroom features a special area for conducting business via satellite.

Neat touches that show the attention to detail for guest comfort and luxury are the illuminated handrails on the companionway and the crystal glass artwork that is a wall feature in the lower deck lobby. The drinks fridge in the lobby area is also a thoughtful touch.

The raised wheelhouse is accessed from the saloon and galley lobby via a stairwell and also from the side deck and provides a commanding position for the captain. The wheelhouse includes a full fit-out of the latest Garmin navigational aids including the state-of-the- art Garmin 8000 Glass Bridge and HD open array radar, autopilot, VHF and instrumentation systems. Additional aids to navigation and communication include a night vision camera and satellite phone. The aft end of the pilot house has a bench seat for guests wishing to watch the operation of the yacht. Steps at the aft end of the pilot house lead to the large sundeck area with hard top canopy, where there is also an outside helm position and a large seating area, wet bar and Jacuzzi. 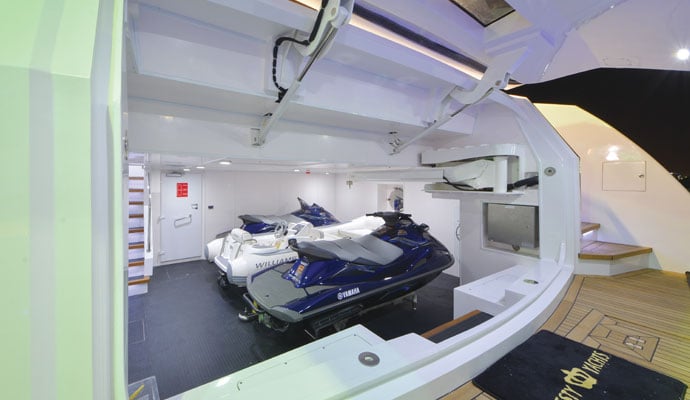 The aft garage on the 122 is the largest tender garage in the Majesty range.

The engine room is accessed either via a stairway from the aft cockpit to the garage or with a hatchway from the tender lift platform. There is ample room for the twin Caterpillar C32 diesel engines, which take the Majesty 122 to a maximum speed of 20 knots; with a cruising speed of 15 knots the range is 2,100 nautical miles. For maximum range, a speed of 10 knots will allow the yacht to do 2,600 nautical miles. Also in the engine room are twin Kohler 53 KVA generators, the central chilled water air-conditioning system and twin water makers. Gulf Craft also offer the option of a fin stabilising system.

Aft of the engine room is the garage with space for up to two personal watercraft, a RHIB, and diving and fishing equipment. There is also an emergency helm position situated at the aft end of the garage and a laundry area with washing machine and dryer.

Once again Gulf Craft has shown that it is capable of producing a world-class superyacht from its shipyard where considerable investment has taken place. The Majesty 122 is indeed a credit to the whole team at Gulf Craft. This new innovative superyacht, with its stylish interior, continues the company’s reputation for excellence and is well placed to represent the Majesty Yachts brand across many of the cruising oceans of the world. 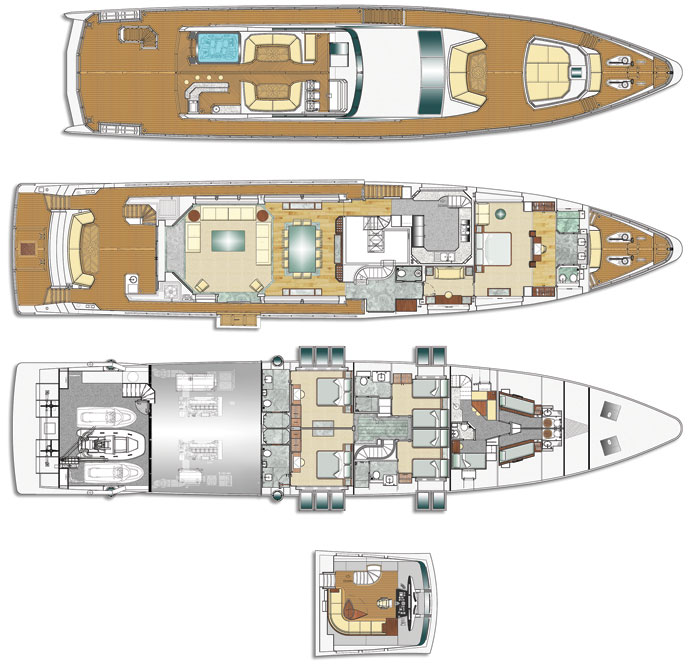 Showing resilience in the face of economic turmoil and always at the forefront of new yachting technology, Gulf Craft is now ...
Start Reading
Gulf Craft May 27, 2015 12:25:19 PM 19 min read

The dictionary definition of ‘nomad’ is, “a person with no settled home who moves from place to place.” This accurately sums up ...
Start Reading